6 TED Talks to use with Animal Farm 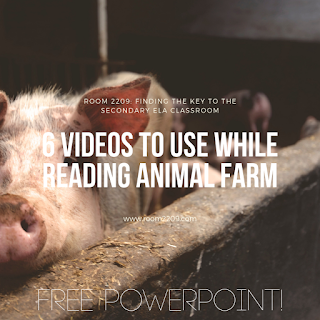 Ok, so I cheated a little.  Not all of them are TED Talks. But... that's not the point.  I use TED Talks every week.  Some of the kids love them, some of them hate them, but every Tuesday for about 10 minutes at the beginning of class (sometimes they run a little longer) the kids watch a TED Talk where they have to identify the title of the talk, the speaker, the speaker's thesis, how it relates to whatever we're reading, and how the speaker uses ethos, pathos, and logos.

So here are the TED Talks I use for Animal Farm, in no particular order:

I like to start the unit off with this one.  It explains who Karl Marx was and his philosophy.  It also lightly touches on the Russian Revolution of 1917.  Just a note: the creators of this video use art to make their point, and some of the art is nude.  Use at your own discretion.

2.  Is Capitalism Bad for You?

Wisecrack is amazing.  And this series takes heavy abstract theories and uses video game images to illustrate them.  The students like watching this video but it needed some extra explanation when it was over.  It's also one of the shorter ones.

3.  The Happy Secret to Better Work

This TED Talk is hilarious.  It even cracked a smile from some of my most apathetic kids.  It's kind of long but I think it's worth it.  I even had some kids taking notes about how to be happy.

4.  How to Start a Movement

Another short one.  But the connection to Animal Farm is almost embarrassing because it is so easy to see.

At this point, we are done with the novel, and it's fun to see the Thug Notes summary and analysis.  Side note: Thug Notes can be inappropriate at times and this video is no exception.  It says ass and at one point, a talking bubble uses the word bitch.  Use at your own discretion.

and last but not least...

This TED Talk is really long, so I don't show the entire thing, but it's an interesting look at why revolutions happen from a financial standpoint.  One of the richest men in the United States explains how the idea that the rich get richer while the poor get poorer will be the reason why democracy is dismantled.

If you would like the FREE PowerPoint that includes these videos, visit my TPT store here!