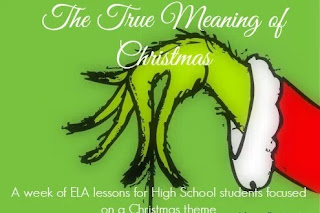 We had three weeks this month: the first week was taken up by STAAR retesting.  The third week was all about semester exams.  This left me with only the second week of December for anything instructional.  It also meant that December was going to be a themed WEEK instead of a themed MONTH.
What better than the true meaning of Christmas!?

I first posed the question: What is the true meaning of Christmas?  I made sure to tell the kids that there was no right or wrong answer; I only wanted to know their opinion.  Then I gave them some guidelines:
Then we shared out.  And oh boy.  Most answers included presents, spending time with family, and getting time off from school.  I did have one kid explain that Christmas wasn’t about presents, but about charity and love and giving.  Slow down GT… I won’t have anything left to teach you.
After that, I had them watch this video:
If this is too much for you, there are plenty of Black Friday stampede videos on YouTube.  But the kids really enjoyed it.  Leave it to mild violence…
Anywho… I had the kids then write a paragraph describing the video.  Again they had another five minutes, and within their paragraph they had to answer the questions: who is featured in the video, what is going on, when is it happening, where is it happening, and why is it happening.  The why is important.  The kids should come to the conclusion that people are acting this way to buy Christmas presents (if they don’t make the connection, scaffold and ask leading questions).  Which brings us to our next assignment…
I explained to the kids why Black Friday is called Black Friday (many of them believed it was a racist thing… smh) and the history behind it.  I then explained why 2009 was such a horrible year for Black Friday shoppers (recession… people were trying to give their families a nice Christmas with less money… yada yada yada).  I then told them about the Walmart worker who was trampled by shoppers that year, and what it means to be an ex-pat (trust me, it’s related).
After that introduction, we read the article “Wal-mart Stampede: And so this is Christmas” by Jeannie Ralston.
Article Link
I had the kids create #hashtag summaries for every paragraph (we did the first five together and then I let them group and do the rest) and then they were asked to find every instance where Ms. Ralston shares her opinion on what is wrong with American Christmas.

Storytime!!!
The kids sat criss cross applesauce while I read them Dr. Seuss’ How the Grinch Stole Christmas.  I don’t know what it is about teenagers and reverting back to elementary, but they eat it up.
After reading, I had them complete a story elements worksheet that I found on TeachersPayTeachers.
Literary/Short Story Elements of “How the Grinch Stole Christmas” by VannyB

In all honesty, I hate hate hate teaching crossover.  Apathetic teenagers don’t want to use their critical thinking skills to make connections and, for me, it becomes an issue of pulling teeth.  But I figured that the two pieces I chose were so closely thematically linked that it would be easy.  Right?
Right?
Well for the most part.
First we discussed the article.  I had the kids draw a venn diagram and insert 5 things that they remembered from the article.  Then on the other side, I had them write 5 things that they remembered from The Grinch, was a bit easier because we had just read it the day before.  We then talked about what made the stories different.  Finally we discussed how the stories were similar and filled in the middle section.  I told them to write 3.  Some common answers:
And my favorite:
Now comes the crossover.
At the school where I teach, it is a requirement that we teach short answers with the ABC method.  A= answer, B= back it up with text evidence, C= comment and then conclude.  So when I teach crossover, the formula changes up a bit:  ABBC (answer, back it up from source 1, back it up from source 2, comment and conclude) or ABCBCC (answer, back it up from source 1, comment on source 1, back it up from source 2, comment from source 2, conclude).  I’ve gone hard on short answer responses, so the kids understand the fundamentals.  I had them take notes on crossover and answered any questions.  Then it was time for them to write.  I spent the rest of the 4th day and then 1/2 of the 5th day walking the classroom.  Then I had an individual conference with every student about their writing while I showed the animated How the Grinch Stole Christmas to the students who were either a)still writing or b)had finished and were waiting on me.
Here is the prezi I used to anchor my lesson:
The True Meaning of Christmas Prezi
Enjoy!
christmas lesson Lesson Ideas