Last week I mentioned hashtag summaries and then realized that I had never mentioned them before.

Anywho... #hastagsummaries have changed my life: they're quick, they're fun, they're creative.  And I've had quite a few kids tell me that this is the easiest way for them to retain information when it comes to those long boring essays that they have to read for the state.  So #winwin. 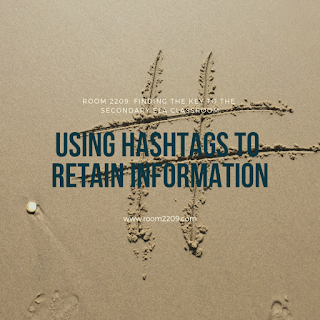 
For example, we were reading an article about the 1920s.  Here's the paragraph:


Women were delighted by the ratification of the 19th Amendment, which gave them, at long last, the right to vote.  Feeling emancipated and in rising demand on the labor market, young, urban and fashionable flappers joined men in boycotting the Prohibition.  The most unpopular and disregarded law of the era, it was so disliked that an estimated 80% of U.S. Senators, Congressmen and high government officials - including the three U.S. presidents of the era - imbibed the banned alcohol.

-  "The Roaring Twenties" by Mike Kubic

And that's it.  They're that easy!  I hope you find some use for them in the classroom.