If I Could Get Away With It: TV Edition | Buzzfeed's Unsolved 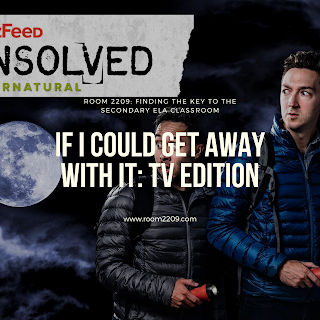 So, this is the second edition of this series. I really wish that I could show Buzzfeed’s Unsolved. Here’s the trailer for season 4. (Warning: it is NSFW)

I absolutely love this internet show. Two guys (Ryan and Shane) who work for Buzzfeed, go to notoriously “haunted” locals all around the world and try to commune with the spirits there. If the show wasn’t already entertaining enough, the dynamic between Ryan and Shane is hilarious. Ryan (who claims to have had experiences with the paranormal) is usually scared shitless in every scenario. Meanwhile Shane does everything he possibly can to piss the ghosts off enough to interact with him. He concludes every episode as a non believer, and I don’t think that will ever change. None of the evidence into the paranormal is ever conclusive, but I don’t think that it would be “unsolved” if they ever found any.

If I could get away with teaching this show, I would use it as context for some of the things we study. There is an episode where they go to Salem, Massachusetts and try to talk with a few of the victims of the trials. What an engaging way to begin The Crucible. And they give a lot of the context that I usually use documentaries for. The episodes could be used for lessons on evidence, Ryan and Shane themselves can be used for a lesson on characterization. I can also see using Unsolved to jump start a research project, or use one of the episodes as a writing prompt, creatively or argumentatively.

I can’t get away with teaching this show because:

I guess I’ll just continue to come up with engaging lessons that I’ll never teach while I watch the show in my free time.

P.S. They have a “True Crime” version of the web series that I haven’t watched yet, but I’m sure there’s good content there too.