Showing posts with the label Anthem
Show all

Before I create a unit, I always create a Pintrest board to generate ideas. I find that it’s the easiest way for my chaotic mind to organize something as complex as lesson building. Anything and everything I find that relates to the topic goes onto the board. I then filter through relevant materials and start to build a calendar from there. Below, you’ll find the board that I used in my preparation to teach Anthem by Ayn Rand . I hope you find it helpful. Thank you and happy teaching!
Read more 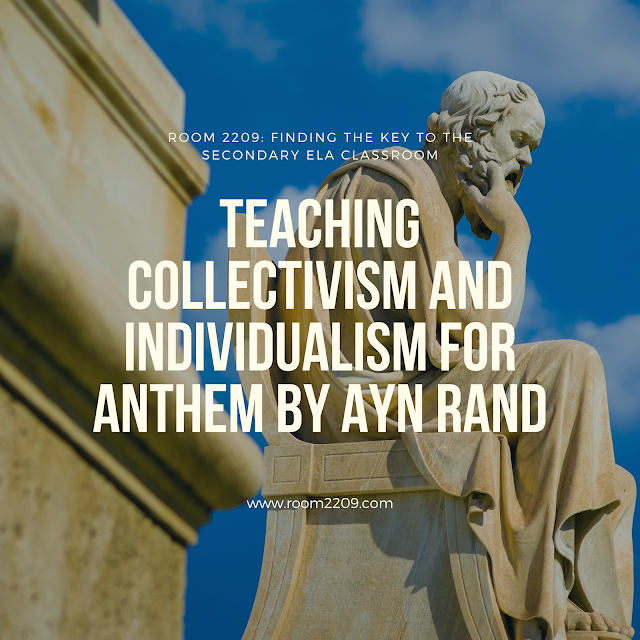 The two philosophies of collectivism and individualism are heavy throughout Anthem by Ayn Rand. When I decided to teach this book, I researched both ideas and knew that if I wanted the kids to understand these heavy concepts, I was going to have to simplify and condense. And what better way to simplify and condense then pictures!? As the kids came in, I had this picture of V from V from Vendetta on the board: Those that have already seen the movie knew the reference, and it got the wheels turning. I then showed the kids several pictures of people doing things alone. With some discussion they were able to grasp the theme that I was going for. I switched over to several pictures of people doing things in groups. This one was easier to get at because they could already see the patterns we were making. Then I gave them the definitions for individualism and collectivism. They wrote them down in their notebooks. We discussed a little and by the end they understood that the basic tena
Read more 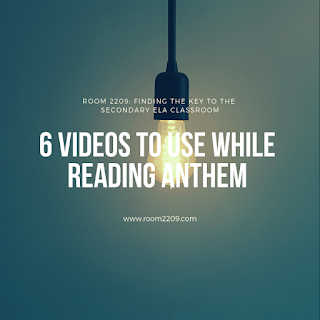 I've talked about my love of TED Talks both here  and here .  When we did our Anthem unit at the beginning of the year, I found more in the other channels that I subscribe to on YouTube than I did on TED that related to the book.  So here they are: six videos I used to supplement  Anthem by Ayn Rand.  If you're interested in the PowerPoint I use, you can find it in my TPT store here . #1: "Changing Educational Paradigms" by Ken Robinson This is the RSA Animate version of the longer TED Talk "Do Schools Kill Creativity" by Robinson.  In it he discusses the idea that culture and learning have changed, therefore schools need to adapt to the way kids are learning.  The whole video is an interesting watch, but what I used to relate to Anthem was the bit about divergent thinking.  We had a whole group discussion about divergent thinking and how it relates to Equality.  The students were also able to relate other parts of the video (such as the assembl
Read more
More posts