Showing posts with the label Things Fall Apart
Show all 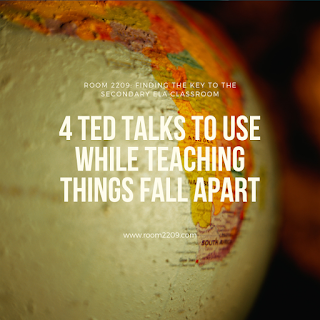 Here we go again... 1.  “What makes a good life?  Lessons from the longest study on happiness” by Robert Waldinger Okonkwo is obviously an unhappy man.  Turns out the key to happiness is the relationships we build.  I guess someone should tell Okonkwo that... 2.  “How movies teach manhood” by Colin Stokes I love the ideas presented in this talk.  I think the messages that we're sending to our kids through film aren't always inspiring.  Don't get me wrong, I don't believe in censorship.  However, when society has a test to determine how female inclusive a film is and most films fail it, there's a problem. 3.  “The Five Major World Religions” by John Bellaimey Many of my students don't know anything about religion outside of their own.  This video was, for many of them, an introduction to other religions.  I connected it to the book through the theme of imperialism. 4.  “How Africa can use its traditional knowledge to make pro
Read more
More posts